It’s 21 days until the 2017 New York City Marathon, which will be my third. I thought this year was going to be ‘the’ year, and perhaps it still will be, but the omens have not been good.

I was expecting 2017 to be a year of PR’s and PB’s but instead a niggling knee problem and ongoing issues with my right foot and ankle have clipped my wings, and a general malaise set in throughout the year. Compared to 2014, which was my first ‘serious’ year of running, the races I’ve run this year speak for themselves. Let’s take a look.

Here is a table of my Five Boro’ Race results from 2014 and 2017, and below this is plotted on a graph showing pace per mile for each race. 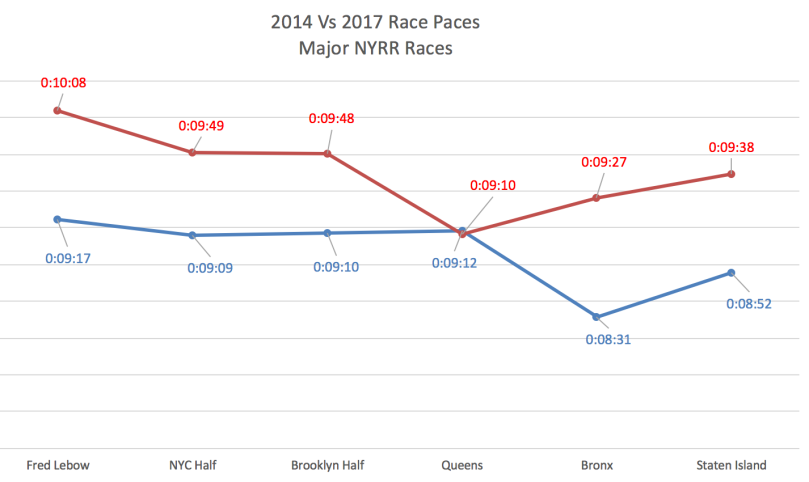 With the exception of one race, the Queens 10K which is the shortest, my race pace is slower this year than in 2017. Not only that, but the gap is pretty consistent among the Half Marathon races (46 seconds at Staten Island, the latest, and 49 seconds at Fred Lebow).

In 2017, my predicted (and recommended) pace is 10:20 – 10:38 per mile. If I can hold the higher end of that, without going too fast at the start, there is a chance I can pull this one of out the bag. A marathon PR really would make this year worth it.