Barely had to breath hard, but hard on the legs. 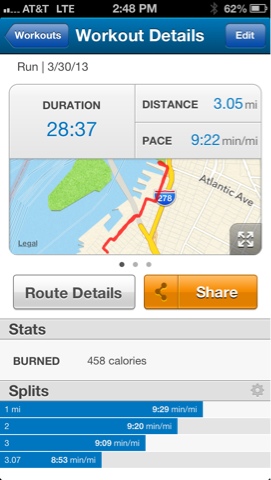 More pleasing was the almost perfect splits, each slightly faster than the last

Four miles is now going to be the new baseline training run for the spring and summer – it felt pretty good.

Let’s face it, one of the ultimate goals of every runner is to complete a marathon. In fact, even for non-runners, getting that 26.2 under their belt is a badge of honor that can’t be taken away from you. When I started running last year, it wasn’t really something I had in mind as a goal. I really just wanted to get of my ass and start running. But, I decided in January, that this was something I’d like to do too.

Thanks to NYRR, by joining them before the end of January 2013, I’m able to take them up on their 9+1 offer. Basically if I run 9 qualifying races this year and volunteer for at least one, I am eligible for entry into the 2014 marathon. That gives me just a little under two years to prepare for the event itself.

So, in the spirit of getting back on track for some serious road time, I’ve signed up for a few 5K’s between now and the summer, with the aim to get at least two 10K’s under my belt in the autumn – a half marathon sometime early next year, either New York or Brooklyn Half and then into gear for some serious training for the actual thing next year. I’m hoping for a sub-four hour time, which means sustaining around 9-min miles for the 26.2 miles.

I read recently in Runner’s World that to be able to train properly for a marathon, you need to have been running four times a week on average for at least the last six months (something I cannot claim, but could certainly achieve) and in the last 10 weeks or so, should be clocking 30 miles per week.

If nothing else, writing about it seems to be pretty inspiring. Oh, and the 3 miles I ran today – felt pretty good!